Willi asked about our trip.  We went through some of the highlights and then said, “Something funny happened on our last day. This guy Fred Stone got two names in a prayer meeting; Raman and Kira.”

Willi said, “Oh you mean Raman and Kiron?  We know them.”

The hair on our arms and necks stood on end and we all got goose bumps.

“What do you mean you KNOW them?  Are you telling us they actually exist?”

“Yup, they live in Delhi.  Raman has just resigned from his job and wondering what God wants them to do next.  Their daughter Alia is at Woodstock and comes to CNC.  Raman visited once when you were out.”

We couldn’t believe what we were hearing.  It was SUCH a God moment.  What were the chances of that?  1 billion Indian people and we find a couple, Raman and Kiron, the first week that we are back home.  They also happened to be at a crossroad, asking God to give them some direction.

Within a week Tony went to Delhi to meet them.  He knocked on their door and introduced himself.  At that stage, he had long hair and an earring.  Fortunately they had heard about us from Alia and the Bartons so they invited him in.  They chatted until 1.30 a.m.  Tony told them God had given us their names in South Africa and of course they wanted to know all about that.  Who was the man? What type of person was he?  What was his character like?  They were surprised to hear that Fred Stone wasn’t the mega prophet type but a practical, hard-working family man who loved God.  Tony wasn’t sure how much to tell them about the word.  He just said, “Let’s start a friendship and see what happens.” 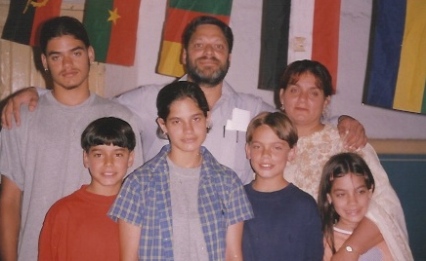 They put their children into Woodstock School, found a house and that was it.  Those days were full of eating, laughing, talking, having children’s concerts, dancing, singing and great friendships.  We spent hours and whole days and nights together.  They were like quick growing bamboo shoots.  Fred was right.

Now what if Fred had been too shy?  What if he had held back for fear of being wrong?  What if he hadn’t taken the risk?  How long would it have taken for us to meet Raman and Kiron?

How many times have I been too afraid to speak when God has given me something to say?