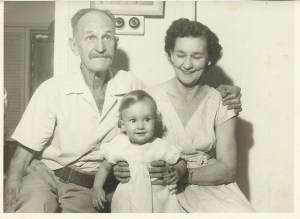 Papa and Mom- my grandparents on my mum’s side.

Billy Graham was coming to town!  I had no idea who he was.  I guessed he was a great man because there was a great fuss.  Lindy’s mum had been asked to play the piano for the crusade. She was really excited.  Lindy was going to turn the pages for her so she would also be on the stage.

Somehow I managed to get my whole family there.  Dad literally dragged Sue into the car; almost kicking and screaming.

We arrived at the Billy Graham Crusade with thousands of others.  I was amazed that so many people had come and I wondered if any of my old Sunday school teachers were there.   Papa came with us under a lot of duress.  He was rolling his home made cigarettes and mumbling about a fly that had flown into his eye.  “Of all the thousands of people here, why did it choose my eye?”  There was a lot of complaining coming from Sue and Papa.

From way back in the stadium, Dave and I could see Lindy on the stage. We told Wilf and Val that we needed the toilet and made our way to her. We stood behind the stage messing around and talking to friends.  We didn’t hear a word Billy was saying. Before we knew it, thousands of people started coming towards the stage.  Dave and I were caught up in the crowd.  Two counsellors asked us if we wanted to become followers of Jesus.  We both nodded.  Dave closed his eyes and so did I.  It was a short prayer and I knew what it meant.  I wasn’t sure Dave did.  I was really nervous that he was going to add, “and God bless the Zulu boys.”  We gave the people our address and that was that.

We drove home with such tension in the car.  Dad and Mom couldn’t find us in the crowd and Sue and Papa were really playing up.  Over the next couple of days we found out that each one of us had gone forward at the end of Billy Graham’s preach.

After that night with Billy Graham, one of the first things that changed was my temper.  I was more patient.  Somehow I didn’t want to hurt people with my words anymore.  The fear of fire left me and I was secure, knowing that when I died, I would go to heaven.  I knew then how to answer Lindy. My only answer to God would be, “Because of Jesus.”

Wilf and Val were NOT happy.  Suddenly religion became the main topic for discussion.  During an argument I told them that they needed to be born again otherwise they wouldn’t go to heaven. For the first time in my life, Val slapped me across the face.  “How can you say that?  Don’t you know your father is the superintendent of the Sunday school?  If anyone deserves to go to heaven it would be us.”  I told her I didn’t say it, Jesus did.  From that night on there were to be no religious discussions in the house; especially not at the table.  There was more tension than ever.