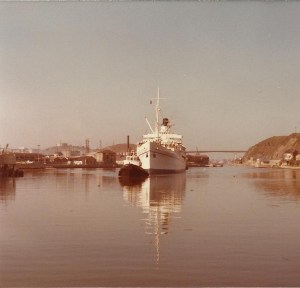 Ship life was intense and stretching.  It was obvious from day one that I was going to learn a lot about diversity  of   culture.

I shared my first cabin with 3 other girls; an Indian, an American and a Korean. There were some interesting moments.  Cleaning rosters were made and stuck up on the wall.  After a couple of weeks we noticed the Korean girl wasn’t doing her cleaning duties.  We called a cabin meeting and asked her what the problem was.  Her unblinking reply was, “In Korea, younger girls do everything for the older one.  I am the oldest in this cabin.”   Our unblinking reply was, “Well you’re not in Korea.”  Things did improve a bit, but it was hard for her.  There were some who were highly qualified and had to scrub decks and wash 100’s of dishes every day.  For many, being in the kitchen was only for women.  Well, that thinking didn’t last long.

We all had our way of doing things.  The results were often the same. We learnt quickly that our way wasn’t necessarily the best way.

Life was full.  There were different departments and we all had a job.  It didn’t matter what we were before we came onboard.  We worked where we were put and there were no arguments.  If we didn’t get on with someone and asked to be moved, we were made to stay there until we got on.

I started in the Book Exhibition.  It was apparently the place to be.  It was a lot of fun and lots of hard work.  We did inventory, orders, stacked the shelves in different languages and learnt how to deal with all kinds of people.   The plan was to be in South America for 2 years and it was compulsory that we learnt Spanish.

We sailed from one port to the other and every time we set sail, the exhibit had to be covered and tied down.  If the weather was good we were able to set up for the next port while we were sailing.  If it was bad, and we were throwing up, we prayed the books wouldn’t be lost at sea.

There was a HUGE storm on the trip from Jamaica to Mexico; massive waves, lots of sea sickness and many bookshelves that hit the deck.   It was scary having to go up in the howling wind and beating waves to tie the shelves down properly.  It was one of the biggest storms experienced by the Doulos.

There was a lot of sea sickness, but life had to go on.  Michel, our cook from France, kept running between the deck and the kitchen.  He could barely stand, but there were mouths to feed.  Those who managed to get to the dining room for breakfast were served by very pale waiters and waitresses.  What made things worse was that Michel had grabbed the food colouring instead of the vanilla essence.  The porridge was green.

It seemed that some had psychological sea sickness.  Em Namuco was violently ill and had been in his cabin all morning.   It had been announced the previous evening that we were to set sail in the middle of the night.  He was surprised when someone knocked on his cabin door to tell him that the ship hadn’t sailed after all.  We were still firmly moored.

There was danger but a strange absence of fear.  There were nights when everything was calm and we would lie on the deck and look into the crystal clear, starry night.  Everything around us was in pitch darkness.  We were like a tiny cork bobbing on the ocean.  Not another thing in sight.   The only sound was the ship’s engine.

I was very aware of how small I was in an ocean so deep and wide.  There were many times God spoke of His love for me, reminding me that His love was as vast as the ocean I was sailing on.  No matter how high the waves got and no matter how big the storm became, as long as I was in that ocean, I was safe.