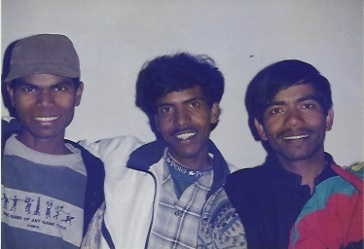 Anand (middle) with his friends Sanjay and Aman -1996

Anand was in his early twenties when we met him.  He gave his life to Jesus soon after that.  He was shy but always had a big smile on his face.  He loved his new family and community.  He got jobs here and there cooking and cleaning.

He often reminded us of the time when Jordan (aged three) asked him if he had a daddy.  Anand told him he didn’t have one.  Jordan’s reply was, “Don’t worry Anand, I’ll be your daddy.”

He met Mina and they got married and had three beautiful children.  Somewhere and at some stage in their hard lives they found they could write songs in their own Garhwali  language.  When they discovered that, the songs came one after the other.  He was prolific.  He was a struggler but a lover of Jesus.

A year ago, Anand was diagnosed with cancer.  With the help of friends and his community in Mussoorie, he was able to have chemotherapy.

Anand went to be with Jesus this morning.  He has left behind his three young children and beautiful wife Mina.

Anand met Jesus many years after I did, but he is seeing Him before me.  The songs he has written and sung on the earth are nothing compared to the ones he is singing right now.