We had some funny experiences with some of our young, soon-to-be married couples in the early days. 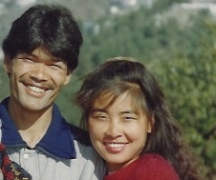 It was two nights before Chandra and Champa were to get married.  We suddenly realised they had no clue about what would happen on their honeymoon or after they got married.  Chandra was employed and accommodated by Tony and Tsering Malik at the time.  Someone overheard Champa saying that Chandra would live in his room and she would be living with us after marriage.

Tony got Tony Malik to help translate for Chandra.  Tsering helped me with Champa in another room.  It was so funny.  I talked with Champa as I would have spoken to my girls, except she had NO clue about anything.  I had to start from the beginning, explaining a woman’s cycle all the way to how a baby was made.  Until that day, she thought she was the only one who had a menstrual cycle every month.   She was so relieved to know she wasn’t sick.  When we got down to the details of the birds and the bees, she got the giggles and so did we.  It was hard to keep a straight face when the expressions on her face were of shock, surprise and amazement.

Champa had grown up in the village.  She told me once,  that late one night she heard her mother groaning in pain.  Champa lay still but opened her eyes to see what was going on.  All she could see was the silhouette of her mother walking slowly out into the night.  The next day she woke up and found she had a baby brother.  She had no idea where he came from.

Tony had just as funny a time with Chandra.   While he had some idea, there was a lot he was totally unaware of.  After our talk the two of them went down to Chandra’s little room and sat on the bed, discussing excitedly all they had just learnt.  We walked past the room and popped our heads in to say goodbye.  They were sitting there beaming as if they had just been told the great secret of the universe.

Others we talked to in the nick of time.  One guy was on his way to his honeymoon when Tony realised he had left out an important part of the talk.  He took him aside and whispered into his ear.

These things were never talked about.  Sex, marriage, husband/wife relationships were all taboo.  We were determined to change that.  We talked blatantly and honestly about sexual fulfilment for both husband and wife.  It was unheard of.  Sex was for the husband’s gratification and to make babies.   The wife was never a consideration.

In the years that followed, we never had to worry about the other soon-to-be married couples.  There was no more shyness or embarrassment around the subject.   The couples we taught were more than happy to pass on what they had learnt.  For us it was routine, for them it was revolutionary.