It is my belief that small children and pets equal chaos.  Small children are chaotic enough.  Why add chaos to chaos?  My default is an easy “no.”  “No,” to cleaning up the mess.  “No,” to house training (potty training is stressful enough.) “No,” to lying to my kids about pet heaven.  “No,” to needing to comfort them when they wake up and find stiff pets.  “No,” to trying to explain death to little people who have just started living.

I wanted it to be a rule.  NO PETS ALLOWED.  No exceptions.  Oh, just one.  When you’re old enough to move out of our house and into your own, you can have as many pets as you want. 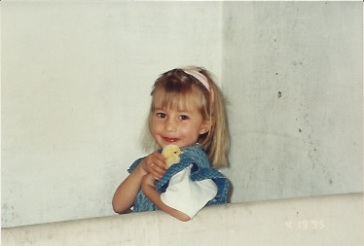 When some lovely villagers presented our wide-eyed girls with two fluffy yellow chickens, I didn’t have the heart to stick to the rules.  We actually got excited.  Tony even made a little hatch for them in our stairwell.  At that stage we weren’t thinking about how ugly they were going to become or that they may not even make it to toddler stage.  We built that cage like they were going to live forever.

They had barely lost their yellowness when Zoë accidently fell on hers.  It died instantly.  The other one ran onto the road and got eaten by a dog.  That was that.  The hatch was cleaned and emptied and I planned to keep it that way.

Along came two fluffy baby rabbits.  More gifts.  Gifts are hard to turn down; especially fluffy ones.  They moved into the hatch and the girls loved them.  Their names were Thumper and Marsha.  We didn’t think to bring them inside when winter set in and they froze.  More tears.

Sasha was about 6 weeks old when we found her on the road in front of our house.  Some boys were teasing her and poking her with sticks.  Her thick coat was henna-red and she had light brown eyes.  Friends of ours told us she was a Bhotia mountain dog.  She was so pretty.  The girls begged us to get her and kept calling her from the balcony.  Tony said, “If she comes onto our property, we’ll keep her.”  She did.  It was love at first sight. 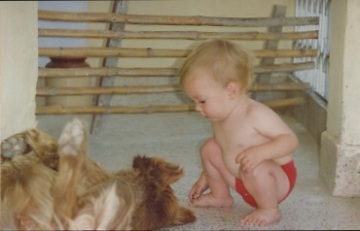 She was incredibly gentle with our children and anyone who visited us.  She loved wandering around the hillside and would come home in the afternoon.  We wondered where she went for her long walks.

She was “told on” when her tummy started getting big and the girls were thrilled to watch her giving birth to her first litter.  Her puppies were cute and easy to give away.   We resisted the temptation to keep one of them.  After three litters we decided to neuter her.

Tony took her to the only vet in Mussoorie.    He was chubby and his assistant was skinny.   We never checked their credentials.  They were our only option.  The operation was done and she was brought home to recover.   Two months later she was pregnant.  Tony called the vet:

Tony:  Our dog is pregnant

Vet: How did that happen?

Tony:  You tell me.  You did the operation.

Goodness knows what they did to her.  She had two more litters after that.

Someone in the neighbourhood complained that Sasha was being a pest.  A few days later we heard her coughing and found her frothing at the mouth.  She was struggling to walk and came upstairs to lie down.  Within minutes she was stiff and not responding at all.  We tried to give her water but she couldn’t open her mouth.  Tony called our one and only vet and his assistant.  They looked so funny coming down the hill on their scooter with their suspicious looking little bag.  Tony whispered, “Here comes dumb and dumber.”

There was nothing they could do.  They left; leaving us with the conclusion that Sasha had been poisoned.   The community was around her.  We were all crying.  Suddenly Asha raised her voice and said, “If Jesus can heal people, He can heal Sasha.”  We all agreed.  Crying turned to praying.  Ash was full of faith.

Within minutes, Sasha’s breathing got stronger.  Her limbs started relaxing and she was sipping the water we gave her.  She was totally healed.  The celebration was incredible.  We had all just witnessed a miracle.  It wasn’t long before Sasha was back to normal, ready to roam around, irritating the neighbours who had tried to poison her.

Tony called the vet to let him know.  This time when he asked the question, “How did that happen?”  Tony was able to tell him.  Jesus did it and unlike the failed neutering operation, He did a good job.