I am about to turn 59 and an empty nest has just hit me on the back of my head.

I miss their shiny eyes. Perfectly shaped noses. Beautiful mouths. Their cheek bones. Their thick handfuls of colourful hair. Their soft ear lobes. Their slender talented hands and their funny feet. I have examined them all. Memorised forever.

I miss them lying on my bed. Long chats. I miss hearing their voices and watching their facial expressions. The smiles and lightness of new things. A proposal. An invention. Something created in the early hours of the morning. A song. A poem. A wire thing. A drawing. An epiphany. A new idea.

I miss their frowns of confusion, the tears of brokenness and regret. Voices raised and hard questions asked. Challenging my core. Shaking my bones. Rattling my cage. Questioning the very ground I stand upon. Tissues strewn and pillows suffocated.   Faces buried in my mattress. Holding each other’s trembling marrow. Trying to understand.

I miss seeing them staring into my fridge. Looking into my cupboards. Walking into my bathroom. Borrowing my stuff.   Messing up my house. Hundreds of bodies around my dining table. Food everywhere. The little red over-worked espresso machine. Coffee cups piled up on the kitchen sink. Butter chicken and a cloth filled with chapattis. Paper napkins. Water fights.

I miss kissing their eyelids and the corners of their mouths. I miss folding up their ears. I miss clapping each other’s hands as we walk along the road.   I miss hearing them harmonising. I miss road trips. Car music. Kids on the car roof screaming their lungs out into the mountains. Yak milk coffee. Memories galore.

Spread out to kingdom come. Out of my reach. Too far away to hold. Their blurred faces on my screen. The deep parts of their eyes, invisible. Losing track of the built up lines of age, stress and anxiety. My band-aids are small and a kiss has lost its power. The heart wounds are beyond me. So many miles between us.

Bonded for life. Joined at the hip. Insanely loved. Etched into my memory- from birth. Day one. Every part. Crooked teeth. Larger than life ears. A brown tooth. So perfect to me. Every millimetre loved by me.

Chaos aside, Kalkaji wasn’t all bad.  We had lots of good laughs there.

During the Holi Festival, the boys all gathered below our flat and shouted for Jordan to go down.  It was our first experience of the colourful festival and we had chosen to be observers rather than to participate.  The boys were unrelenting and we eventually told him he could go.  As he walked onto the road, they emptied a bucket of colourful water over his head.  He was so shocked and upset, he quickly ran upstairs to recover. He then stood on the balcony for hours with his water gun, shooting at everyone who walked past. 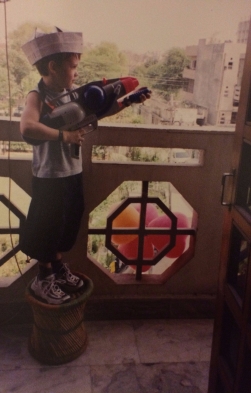 Rus and Glyn Eales moved into a small place behind ours.  We were so close they were able to throw us a toilet roll when we needed one.  We loved having them as neighbours. During Holi, Rus would gather all the CNC young people on his terrace and they would spend the day throwing  water bombs at passersby.  He also made friends with some Kites (huge vulture type birds) who would swoop down to take pieces of meat from his hand.

The little boys in the little park in front of our flat loved Jordan.  He would go down and play cricket with Bunty, Kaalu and Mintu.  Their sisters and girl cousins Rinku, Pinku and Minku were more conservative.  Ash and Zo tried to make friends and they would occasionally visit their flats, but it wasn’t easy.  The little boys didn’t seem to notice that Jordan was a firang.  It wasn’t long before he was asking if I could make him a little donut for his head so he could look like the other Sikh boys.

He tried to speak Hindi with them but their desire to show off their English skills always won.  Something that always got us giggling was their inability to use their “J’s” and “Z’s” in the correct place.  As a result, Zoe and Jordan had to once again, settle on being called “Joey and Zordan.”

Jordan’s favourite question to ask kids, in his strongest Indian accent was, “Fhaart is your name?”  He was shocked when one boy answered, “My name is Fhaart.”  He never got over that one.

Delhi’s infamous summer hit us from behind.  We had experienced it on our short visits over the years, but we had never lived in it.  The billies from the hills weren’t prepared for their first summer with temperatures above 45 degrees C.

Our Gypsy’s air-conditioning had given up the ghost during Tony’s accident (see Post 156) and the black garbage bag covering the right rear window didn’t  even try to keep the heat out.   Driving around Delhi was unpleasant to say the least.

It wasn’t in our budget to get air-conditioners in the flat but we were able to install a desert-cooler in the living room.  It was made up of a steel frame, a water trough and straw padding.  When we first turned it on our house smelled like a horse’s stable, but it did the job.  When the smell got too bad, we put a few drops of essential oil into the water and that was sucked up into the straw.

Summer power cuts were common.  With everyone using their air-conditioners, Delhi’s power source took strain.  When the power went off,  everything went off.  No lights, no fans and no desert-cooler.  Fortunately we had done a strategic swap with Raman and Kiron:  our electric blanket for their inverter.   This re-chargeable battery was able to run two ceiling fans and a tube light in the lounge for about three hours.

During night power cuts,  we would wake up drenched with sweat not knowing how long the fans had been off.   One by one we would drag our mattresses into the lounge.  The kids would soak their sheets in water and we would lie spread eagled under the two droning fans.  There would be lots of giggling and silly nonsense before we finally drifted off to sleep again.

We casually mentioned our vehicle and air-conditioning situation to God. “God, we can do this, but don’t expect us to be too productive.”

When Dudley Daniel heard of our predicament, he very kindly helped us to purchase a/c s for the whole house.  We were so grateful.

Soon after that, someone unknown to us, sent us money to purchase a brand new Toyota Qualis.  Again, we were amazed and incredibly grateful.

For Jordan’s birthday we gave him a gift we could all use.  We put it on our back balcony and it was perfect for those hot, sweaty summer nights.

Necessity is the mother of invention.