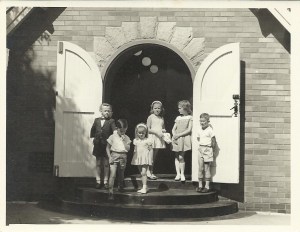 Dad started family movies at the Methodist hall on Saturday evenings.  We all thought it was so he could keep an eye on Sue and her boyfriends.  She was shocked one night when both of them arrived for the show.  Dad would go around with a torch and shine it on the teenagers sitting in the back row.  He wasn’t popular.  We watched every episode of Mission Impossible, The Avengers, The Lone Ranger and The Three Stooges.

That was when I first tried eye makeup.  We had been at Brenda’s house and went straight to the Methodist Hall.  I went to say hi to Val.  She looked at me and said “Did someone hit you?”

“The Lowes” were Methodists and proud of it.  We were members of the Montclair Methodist Church.  Dad would drop us off at church and read his newspaper in the car until it was over. When they needed a superintendent for the Sunday school they knocked on the car window. They figured that dad had nothing better to do on Sunday mornings.  Dad was irritated that his reading had been interrupted, but he accepted the proposal.

We would dress up in our Sunday best and attend church then Sunday school. Church was quite an experience. It was so quiet and there was, “No talking until it’s over!”  The four of us would always get the giggles and we would be separated from each other. Then we would get separated again and again until there were no more combinations of separation. We giggled at the minister in his black dress and white collar; we giggled at the funny wobbly voice that came from Mrs O’Neill sitting behind us and we giggled at the intense look on Wilf and Val’s faces when we just could not stop.  Val would  slap our leg if we got too noisy and that set off the ones who didn’t get it.  If we got uncontrollable giggles we would be marched out and sorted out.

Papa was funny. He would pretend to take money out of the offering bag and would take an extra swig of communion wine when it came around. No matter how bad the experience was, we didn’t miss a Sunday.  We were regular “church goers”.

Sunday school was better than church.  We learnt Bible verses and fun songs about how Moses parted the Red Sea but none of it changed anything.  It just gave me a love for singing and Bible Stories.  By the time I was twelve I could see the hypocrisy of my Sunday school teachers and was bothered that they couldn’t answer my questions.

It was then that tension came into our house.  With the jazz clubs, entertaining of visiting jazz singers and musicians, dad’s radio programmes and band managing, my parent’s social lives were taking strain. The strange and awful word “divorce” had crept into our peaceful, happy lives.  It became very tense.

With the tension came insecurity.  I would lie awake listening to dad’s music but I could also hear their unhappy voices.  It was horrible.  I wondered what would happen to me if they got divorced; where we would all end up, what it would all mean.  No-one I knew had been divorced, but I knew that it meant the end of a happy family. We all drifted further and further away from each other and the church.

BUT, everything had to look good to anyone who might be looking.  We could never talk about our problems outside of the four walls of our house.  We were decent people.  We were “Christians.”